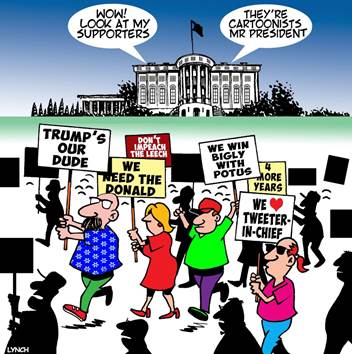 to be re- elected…..again and again

Cartoonists all over the world are reporting heightened states of anxiety over the concerns that Americans might not re-elect Donald Trump in the upcoming November elections.

The National Cartoon Gallery’s spokesman, Paul McKeon said that President Trump had enabled most cartoonists to work half as hard as they used to, as he provided hilarious cartoon material on a daily basis.

“If Jo Biden becomes President, cartoonists will have to start thinking again and looking for weird and unbelievable material that isn’t provided by the White House. Just think how boring it would be to have a leader of the Western World who was rational, truthful and had some knowledge of what was going on in the real world. Cartoonists will be shattered.

At the National Cartoon Gallery , we are working on a petition which calls on American voters to re-elect Trump every four years…. until he stops providing cartoonists with such wonderful material. We expect to get over 100,000 cartoonists worldwide to sign it.”

Any Australians wishing to sign can do so at the National Cartoon Gallery in Coffs Harbour. We have the largest collection of cartoons in Australia, including many of Donald Trump, which he’s not too happy about.

← Winter – UndergroundEven Trump is now happier in a mask →