Check out the latest news from the Gallery

To stay up to date with what is happening at the National Cartoon Gallery sign up to join our newsletter here. 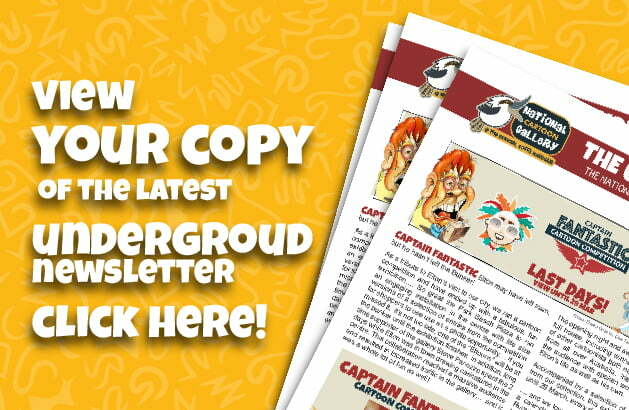 So much has happened at the gallery over the last few months... CLICK HERE to keep up to date with the latest gallery news! 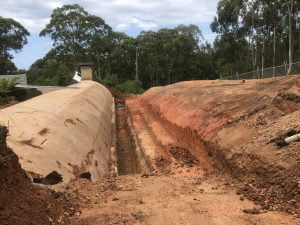 Everyone here at the gallery is very excited to announce construction is underway for the extensions of the gallery!

As you may have heard, we were recently awarded a $2.69M NSW Government grant to build an additional level on top of the current building. The old WWII bunker will be showcased, retaining its original form as we create an impressive new building on top to house a new high tech, historical cartoon exhibition, bound to be a major drawcard for visitors to the region.

The new gallery is expected to be complete late 2020...
Watch this space for more updates! 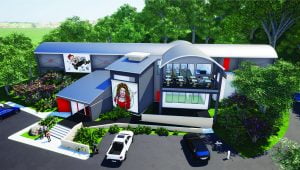 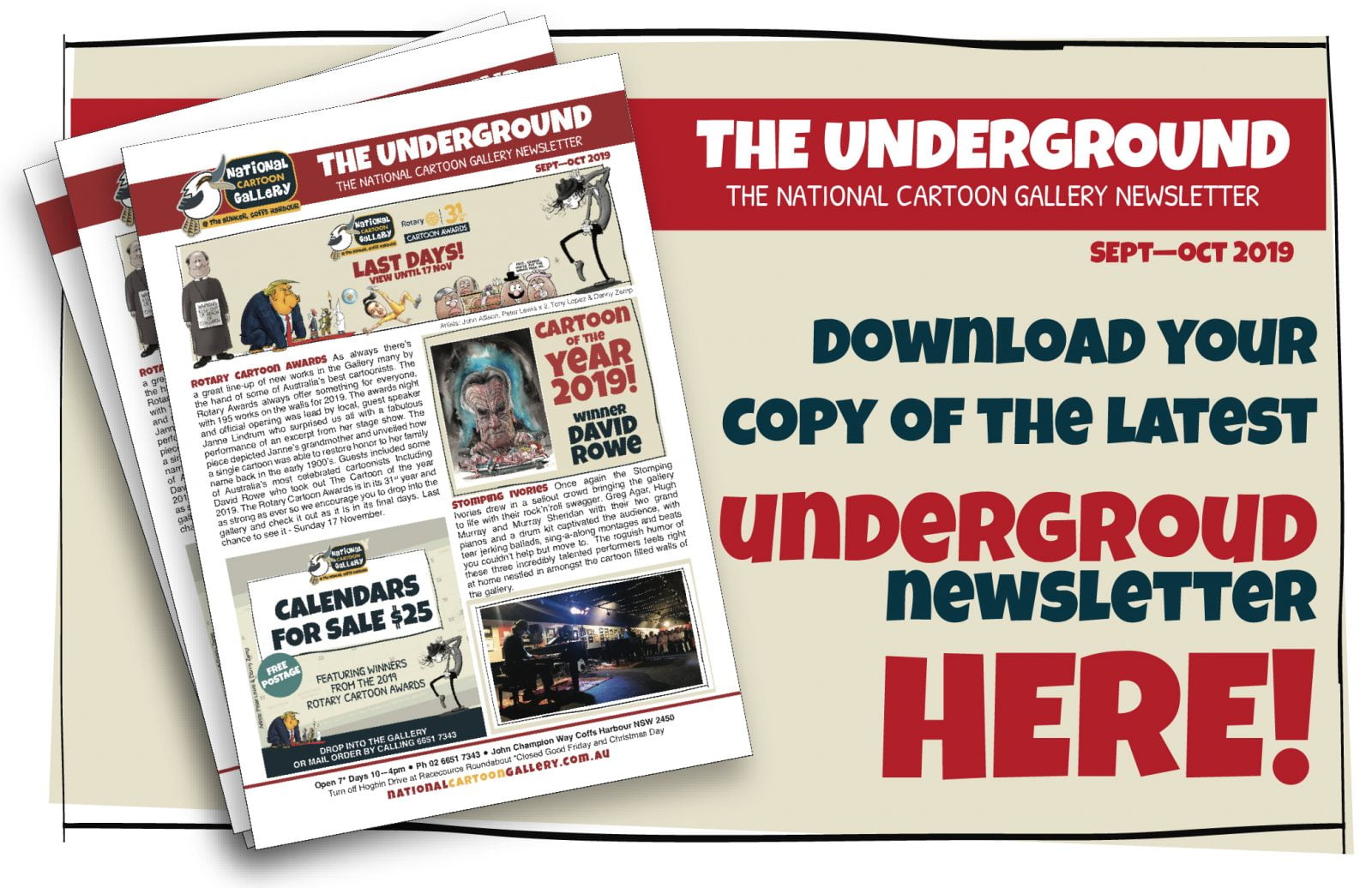 Keep up to date with what's happening at the gallery... Download your copy of The Underground Newsletter here 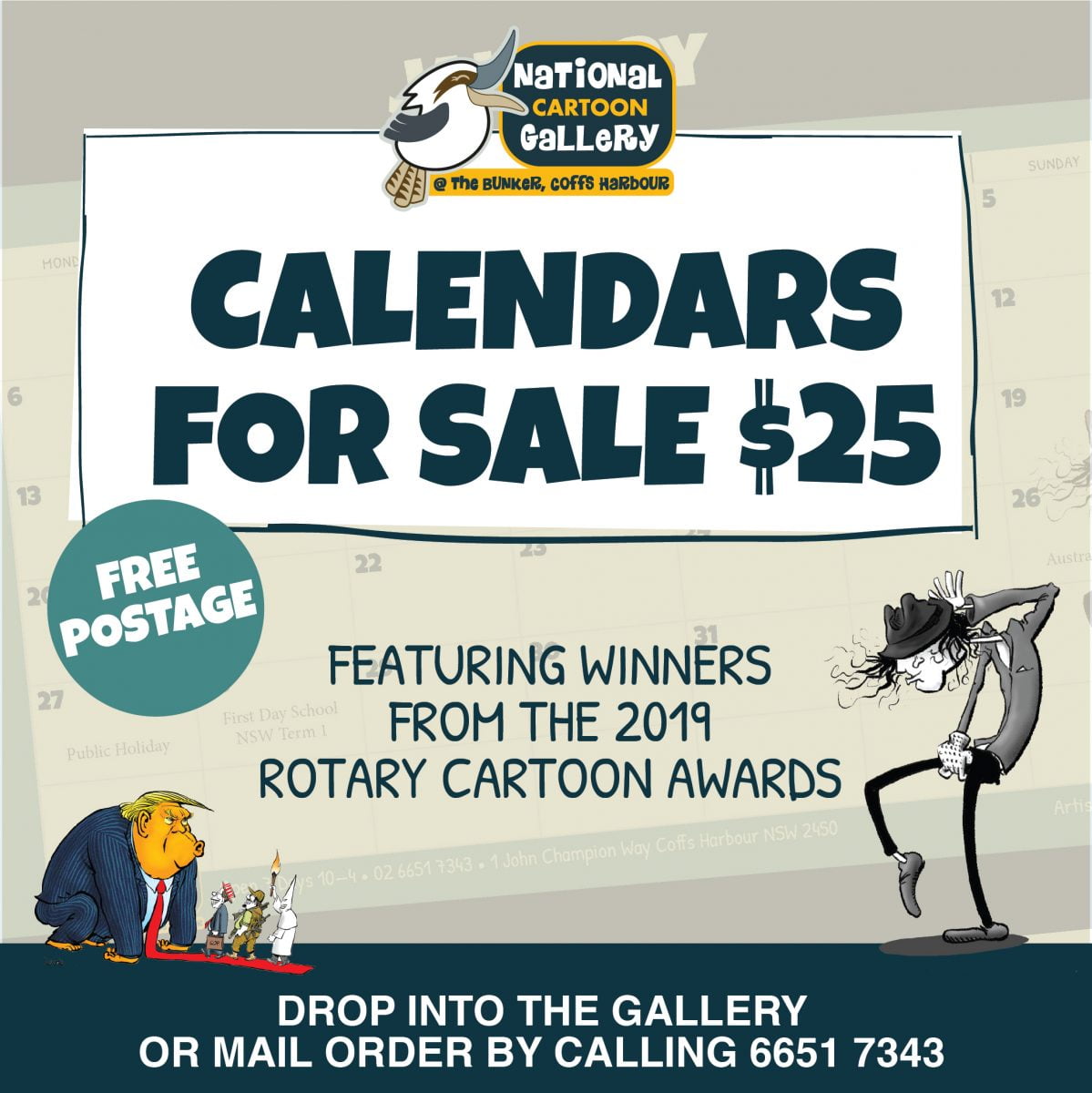 Get the Rotary Cartoon Awards 2020 Calendar featuring this year's winners!

For 12 months, you can enjoy the laughs of the best of this year's awards... it's the gift that keeps giving.

AND with FREE SHIPPING! We've got you covered this Christmas. Call the gallery between 10 am-4 pm to order. 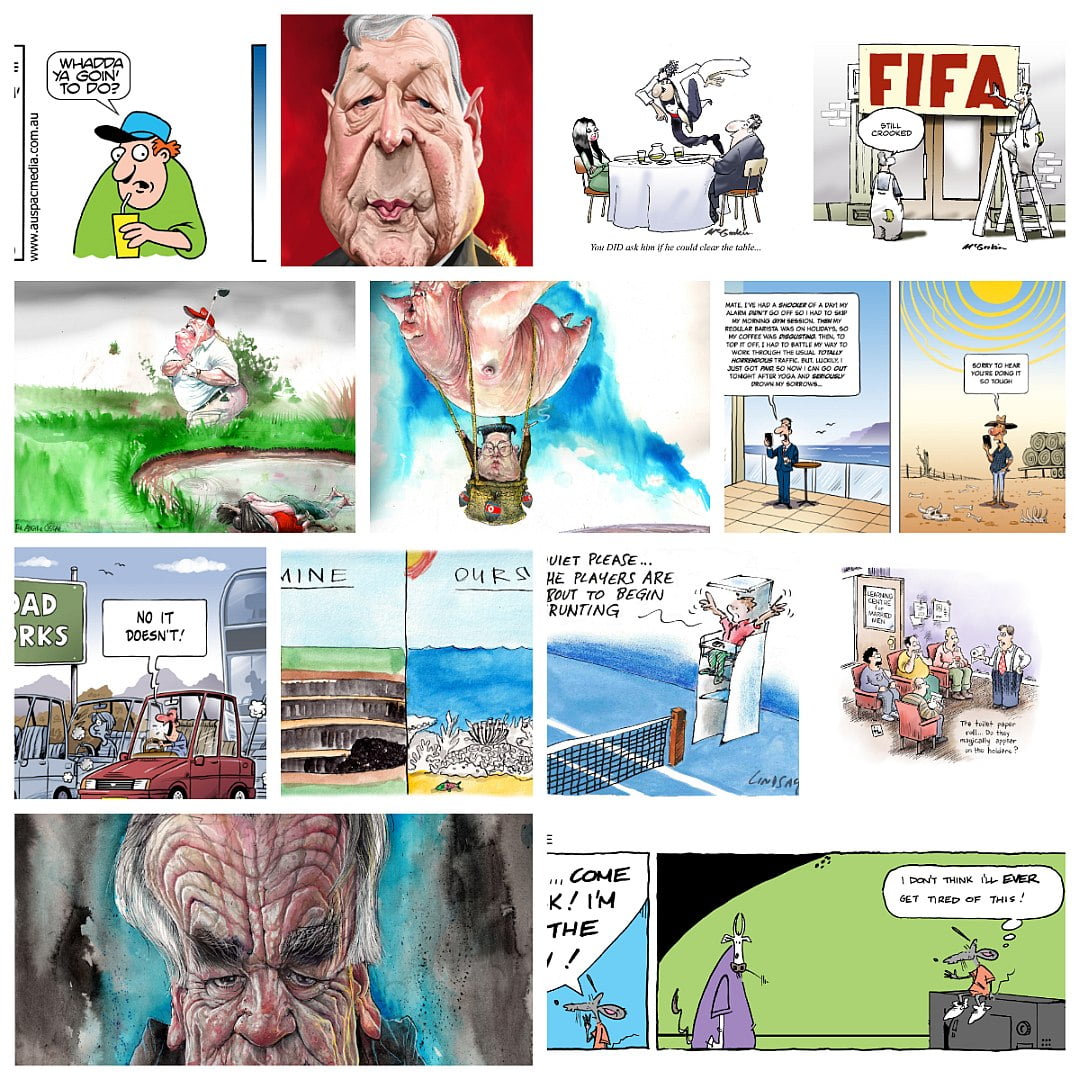 The Special category this year is "Under Construction".

Sponsorship of the Awards by The Coffs City Rotary Club plus sales of cartoon copies at the Gallery, together with other valuable community support enables the Awards to continue to be held each year – to date contributing more than 21,000 works to the 23,500 cartoons held in our collection.

The aim of the Awards is to promote and support cartooning, cartoon artists and The Gallery, Australia’s only original cartoon gallery. The Awards will further establish the City of Coffs Harbour as the ‘Cartoon Capital of Australia’.

The 31st Rotary Cartoon Awards is supported by the Australian Cartoonists’ Association. 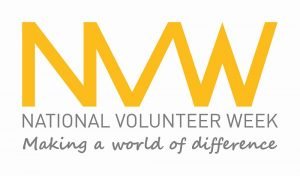 The National Cartoon Gallery’s backbone – apart from its cartoon collection – is its volunteers.

A dedicated band of people give up their time and bring their skills to the Gallery, allowing it to be open 363 days of the year (closed only on Christmas Day & Good Friday).

The many activities at the Bunker – cartoon exhibitions, venue hire, morning and afternoon teas, film nights, cartooning workshops – are made possible by the efforts of the volunteers. They are the foreground of the Gallery: meeting & greeting visitors, providing additional information on the current exhibition, answering questions about the Bunker’s history, as well as assisting visitors with their purchases: artists’ sales, cartoon reprints, and Gallery shop merchandise.

Volunteers are also vital in the Gallery’s background: selecting works to be displayed, matting, framing, labelling and hanging exhibitions, and cataloguing and archiving the collection whether through the Rotary Cartoon Awards or private donations.

The annual Rotary Cartoon Awards are the vehicle that drives the growth of the Gallery’s collection. All the entries received need to be recorded, digitised, referenced, and catalogued. These tasks are all undertaken by the volunteers. It’s a mammoth effort, not only for the sheer numbers of entries needing processing, but it needs to run to a strict timetable.

The National Cartoon Gallery could not operate without its volunteers. Without exception, they are valued and appreciated for their dedication, willingness, and skills. 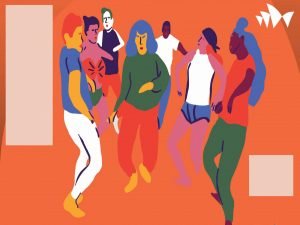 Right here in Coffs Harbour, we will be streaming three headline sessions and an exclusive backstage Q&A.

(All times are AEDT)

ME TOO: YEAR TWO

A decade since the Me Too campaign began, and a year since #metoo rocked the entertainment industry, there has been a clear cultural shift.

Across industries, women who were preyed upon, exploited and harassed have spoken out and sought justice, and the movement has gone global.

But it hasn't all happened smoothly. Louis CK returned to the comedy stage. The Senate confirmed Brett Kavanaugh to the Supreme Court. Now that accountability frameworks have been put in place, are the structures of justice and legal systems changing? Have we seen a fundamental shift in the way power functions, or is it temporary and superficial? How is #metoo playing out in different countries and cultures?

In this essential panel, we'll be exploring how the movement must evolve to represent women worldwide, and to create long-lasting cultural and political change.

FEMINISM IN THE ARAB WORLD

In a global feminist movement, our understanding of women's rights needs to go far beyond the English-speaking world.

Arab women are so often pigeonholed, orientalised and othered in western discussions about feminism. But the reality is there are strong feminist and LGBTQI movements across the Arab world.

This panel, co-curated by artist, poet, and activist Sara Saleh, challenges the assumptions so frequently made by westerners, that Arab women are subjugated and oppressed, by giving space for some of the loudest activist voices across the middle east.

This session will demonstrate that discussions about women in the Arab world can go much deeper than “why do you wear hijab?”, and explore the issues and concerns, both political and personal, for Arab women and LGBTQI people.

While some of our most popular politicians are women, they are still frequently overlooked for leadership positions, are subjected to personal scrutiny to a level not inflicted on their male colleagues, and they cop all sorts of sexist garbage while just trying to do their jobs.

Yet women have a huge amount to contribute to public life, and our society would benefit from greater female representation in parliament. So what needs to change to make more women want to run for public office in Australia? Join this frank discussion about the pitfalls and rewards of working in the sector, and how we can shift the culture so girls who want to grow up to be PM are inspired, not discouraged.

The National Cartoon Gallery will soon be educating and entertaining locals, artists and tourists with double the number of historical storeys, thanks to funding through the NSW Government’s $100 million Regional Growth Fund.

This will bring the Gallery to a whole new level (pun intended!) and make it one of the city’s major tourist and cultural attractions. Once completed, it will double the exhibition space as well as providing a café, commercial kitchen, community art room, and small cinema.

Member for Coffs Harbour, Andrew Fraser and Deputy Premier and Minister for Regional NSW, John Barilaro announced $2.6 million in funding to add a second level to the Gallery, currently housed in a World War II bunker.

The expansion design, which will resemble a WWII Nissen Hut, will provide space to showcase a permanent display of Australian history as seen through the eyes of cartoonists during the past 118 years, and into the future.

Mr. Fraser said, “The funding provided by round two of the Regional Cultural Fund will preserve and showcase this unique cartoon collection of Australian history to an even wider audience, with offerings that will draw even more tourists to the area.”

“With a larger exhibition area and a new multimedia presentation of major events throughout our nation’s history, the recently renamed National Cartoon Gallery will truly be the spiritual home of Australian cartooning.”

Mr. Barilaro said he was thrilled that the NSW Government was able to fund cultural art projects which make our regions such a wonderful place to live, work and raise a family.

“Art, screen, culture, music, and performance are at the heart and soul of regional NSW and this funding will provide even more opportunities for locals to enjoy entertaining and educational experiences,” Mr. Barilaro said.

“Importantly it will also provide artists with new opportunities to showcase innovative and quality works and allow visitors to experience a diverse range of arts and activities while generating social, economic and tourism benefits across the State.”

The Regional Cultural Fund is part of the NSW Government’s $1.6 billion Regional Growth Fund, designed to improve economic growth and productivity as well as community amenity with investment in regional communities.

Summer has officially arrived and what better exhibition to come and see over the holidays than Surf's Up here at the National Cartoon Gallery!

Not only will you see the amazing cartoon works from a variety of cartoonists, but you will also see items from local surfing organisations, and surf-related artworks from talented artists in the Coffs Coast region.

There will be interactive competitions running for the duration of the exhibition for people of all ages, and thanks to the generosity of Coopers Surf Jetty we will be raffling off a surfboard as well.

Lee Winkler will be our Guest Speaker at the official Opening  Night on 14 December. Well-known locally through his Surf School, Lee has well over 25 years experience as a surfer, many of them as a Professional, travelling the world and catching the best waves. He competed at the Elite World Championship Tour level, alongside other surfing greats: Kelly Slater, Andy Irons, Dane Reynolds, Joel Parkinson, Jordy Smith, and Mick Fanning.

Entry is a gold coin donation and nibbles and a cash bar will be available.

Surf's Up runs until 3 February, open every day from 10 am to 4 pm (closed Christmas Day) with entry still only $5 for adults, $3 children u16, and FREE for Friends of the Bunker and children u5.

2018 marks the 30th Anniversary of the Annual Rotary Cartoon Awards, a great achievement!

For a mere $10, you can pick up a copy of the 30th Anniversary Edition booklet available now at The Bunker Cartoon Gallery. It contains the complete list of all the winners, from the Awards' inception to 2018, along with many cartoons, articles, and news items.

There are also 30th Anniversary T-shirts, also only available at The Bunker Cartoon Gallery. 'Small' through to 'XXL', for $25 each.

Both perfect gifts for the cartoon lover!

The aim of the Awards is to promote both cartooning and Australia’s only cartoon gallery, The Bunker Cartoon Gallery – soon to be renamed the National Cartoon Gallery - and to further establish Coffs Harbour as the ‘Cartoon Capital of Australia’.

The Rotary Cartoon Awards is considered one of Australia’s most prestigious and important cartoon competitions and is designed to recognise the works of Australian cartoon, caricature, and comic strip artists. Cash prizes are awarded across all categories.

For the 30th Awards, two special categories were included: one for international entrants and one for 12-18 years, each with its own theme.

The Rotary Club of Coffs Harbour City and the Bunker Cartoon Gallery Inc. are the co-sponsors and co-hosts of the Awards.

Learn how to make your own Zine (magazine) using collage, text and drawing Suitable for 6 – 15y $15 per workshop includes materials Book Here

MORE ABOUT THIS EVENT >>

Learn how to make your own Zine (magazine) using collage, text and drawing Suitable for 6 – 15y $15 per workshop includes materials Book Here

MORE ABOUT THIS EVENT >>

Want to keep up with what’s happening at the Gallery?